Oh frost, leave my bamboo alone (or 'How to hedge a bamboo plant without touching it!') 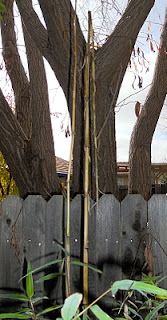 The ravages of winter have indeed shown its effects upon some of my clumping bamboo plants. Clumping bamboo starts to shoot from late July through late October. Some culms harden in time and survive the late Fall/Winter frost largely intact, which is the case for most. For those culms that shoot in late October, they are still tender and very prone to frost damage.
Often the damage manifests itself by freezing the top part of the tender culm, freezing off to an internode that is hardened off enough. The result - a hedging effect on some of the clumping bamboo. This is consistent year-t0-year with varieties like Bambusa ventricosa 'Kimmei' and Himalayacalamus falconeri 'Damarapi'. Hence, both have grown to nice tidy hedges, naturally, with no pruning from me. Pictured above is a Himalayacalamus falconeri 'Damarapi' culm tilted over from the frost.
Cheers!
Sean
Mad Man Bamboo
(916) 300-6335
www.madmanbamboo.com
Mad Man Bamboo Facebook Page
Posted by Mad Man Bamboo Nursery at 9:28 PM