John and Fred, owners of a home in the Foothill Farms area of Sacramento purchased some Bambusa multiplex 'Alphonse Karr' bamboo plants from us last fall. 'Alphonse Karr' is a clumping bamboo that grows 15 to 20 feet, can take full sun and is a great choice to create a natural privacy screen.  They planted them on October 17, 2010 (pictured below).  The objective was to screen a neighbor's house where there living room was on the second floor. 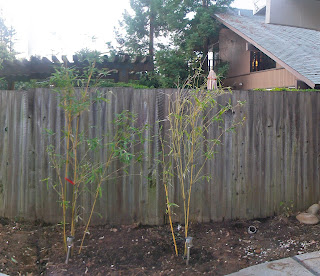 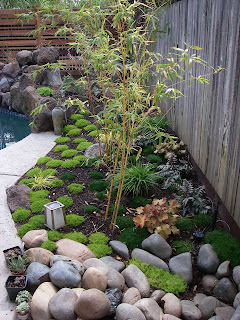 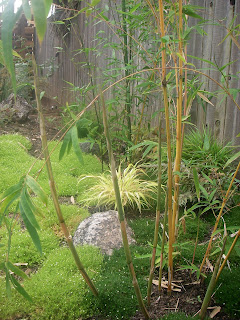 AFTER - June 28, 2011
John and Fred cited some pretty dramatic growth in a 12 day period, from June 16, 2011 to June 28, 2011 as temperatures hovered around the 80 - 90 degree range.  During that time, nine new culms emerged at about 3/8 inch in diameter.  Besides the sunny warm temperatures, they worked in one large bag of good potting soil in with one small bag of steer manure last year into the soil which is now really paying dividends by a proliferation of new culms.
'Alphonse Karr' is a great bamboo choice because it is clumping, serves well as a privacy hedge and has some ornamental beauty that makes it a distinctive feature in any garden.  Congratulations to John and Fred for the plants they call 'Happy Bamboo.'  It looks these bamboo are grinning ear-to-ear!
Sean
(916) 300-6335
www.madmanbamboo.com
Mad Man Bamboo on Facebook
Twitter: @madmanbamboo
Posted by Mad Man Bamboo Nursery at 10:23 PM 2 comments:

Dragonflies in the garden...

I have been amazed today at the number of Dragonflies perching on my bamboo and flying about.  Some are metallic blue, some are fire red.  They are truly beautiful creatures. 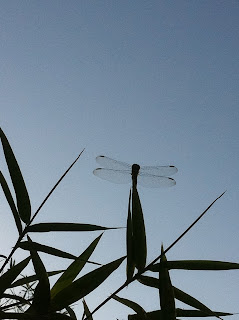 I've always wondered why we have some many in my Rocklin neighborhood.  Turns out that they need to have proximity to lakes, ponds, streams and wetlands for their larvae to flourish.  Turns out that a half a block away from our house is a huge wetland/creek. 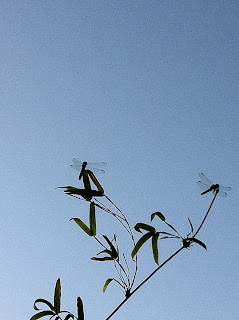 Dragonflies are a critical 'friendly' predator in the insect world.  They feed on nuisances such as mosquitoes and flies, among other flying insects.  With the number of mosquitoes we have emerging at dusk, I am happy to have Dragonflies hang out in my back yard.

Black Bamboo - what a beauty! 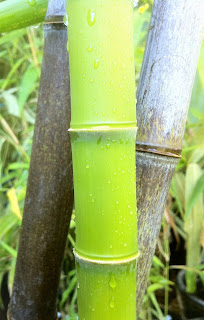 Black Bamboo is truly a beautiful bamboo.  The most common variety is Phylosyachys nigra 'Black Bamboo' which grows up to 30 feet tall with 2 inch diameter culms.  The culms shoot a rich green and over a year and a half turn a jet black.  From green to a splotchy green/black mix, finally to a jet black color on the culms (see the contrast between a new culm in the foreground and an older culms in the background).

There are many other varieties that are genetic variations of Black Bamboo, including:

Phylostachys nigra 'Hale' - this is smaller than standard Black Bamboo at 20 feet and 1.5 inch diameter culms.  Its supposed to turn blacker quicker. 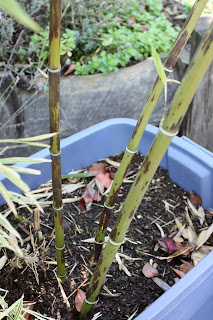 Phylostachys nigra 'Bory/Leopard Skin Bamboo' - This bamboo gets rich black spots on the culms.  This bamboo is larger at 50 feet tall and 3 inch diameter culms. Pictured above.

A common question I get is whether there are clumping varieties of Black Bamboo. There are, but they are too cold to grow here in the Sacramento area.  But Phylostachys nigra 'Black Bamboo' doesn't fail to give the 'wow factor' in a garden landscape, even if it has to be containerized.

What else can I say?  Black Bamboo is truly a beautiful, unique bamboo.

A picture is worth a thousand words. "How fast will my bamboo grow?" -Answered.

"How fast will my bamboo grow?"

Of all the questions I get asked when someone is considering bamboo, this is the #1 question.

The answer to this question is of course, like most things in our world, is full of variables, uncertainties and other factors that no one can predict with true certainty.  With plants, there are factors that are somewhat controllable -  like the amount of water you can apply through modern irrigation or soil conditions that are also somewhat controllable or at least can be amended to a desired condition.  Also, you can certainly generalize that a running bamboo will grow quicker than a clumping bamboo.

Others factors are very unpredictable, totally out of our control as gardeners, and sometimes downright frustrating - variable weather conditions such as 60 degrees and overcast one week and then 90 plus and sunny skies, the next.  In Northern California, we experienced weather conditions that were unusual, cool, wet conditions up through June.  With bamboo, it was a mixed blessing - less growth due to lower soil temperatures, but rainwater does plants alot of good - refreshing leaves and greening the plants.

So, with so many variables at play - its hard to provide a standard answer to this perplexing question - 'How fast will my bamboo grow?"

So, with the uncertainty this question brings and the difficulty in explaining 'how fast bamboo grows", I always love to show before and after photos of different types of bamboo.  This particular set of photos came from Mark from Sacramento who planted Bambusa oldhamii 'Giant Clumping Timber Bamboo' in early June 2010. 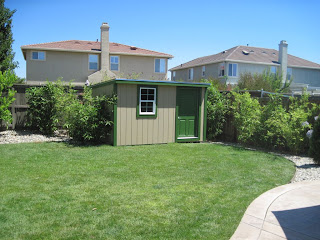 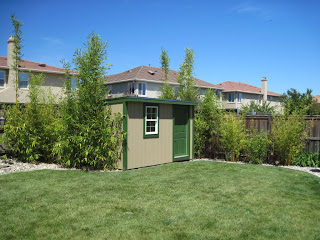 A picture (or pictures) is worth a thousand words, bottomline and generally speaking, the advantage of bamboo is that you can expect faster growth than an average hedge plant, even with the tamer, slower-growing clumping bamboo,  and even with the unpredictability that gardening can bring.

Were at the Farmers' Market in Rocklin...

All packed up and ready to go. See you at tomorrow's (Saturday) Rocklin Farmers' Market, 8:30 am to 1 pm, at 6636 Lonetree Boulevard in Rocklin, CA. Pick up a bamboo plant or two and some fresh fruits and vegetables from local farmers. Hope to see you there!

Capitol park is a gem... and other observations.

Today, we took our daughters to see Mary Poppins at the Community Center Theatre in Downtown Sacramento.  Before we headed to the show, we had a nice, low-key lunch at Capitol Dawg.  Three Capitol Dawgs, a Lions Dawg, Onion Rings and Garlic Fries later, we headed for the show (the day started off right with a good hot dog and sides).  My tastes are simple, what can I say.  Mary Poppins was a great production (especially the sets) and everyone was happy.

After the show, we took a stroll in Capitol Park, truly a gem.  I don't work for State Parks, so I say this with the perspective of a true visitor...  what a beautiful, tranquil park.  I've always had an affinity for state parks and I'm quite saddened by where California's state parks are headed after years of budget cuts.  I'm one of those guys that drops $5 in the donation box every time I visit a state park because I think its worth doing.  Heck, I know that taxes are generally unpopular, but that is one tax I'd personally (speaking for myself) be happy to pay.

The weather couldn't be better and here are some photos of what I found as we explored the eastern half of Capitol Park, Downtown Sacramento and Midtown Sacramento after the show: 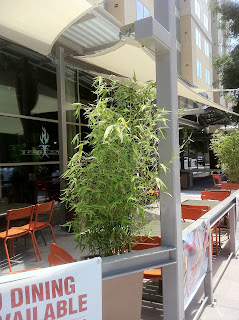 Nice use of bamboo at a restaurant (I think it was 16th and L Streets in Sacramento, CA).  Created a nice patio dining experience. 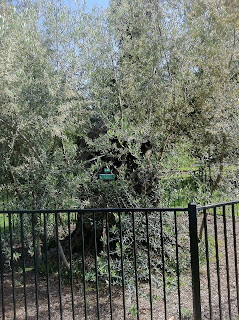 This was a very old olive tree.  The original stump was thick, big, but topped.  The foliage you see are suckers from the base and roots.  This picture does not do the stump justice - very interesting shape. 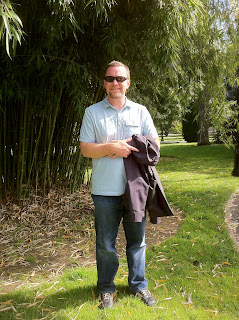 Here I am next to a great specimen of a Phylostachys bambusoides 'Japanese Giant Timber Bamboo.' 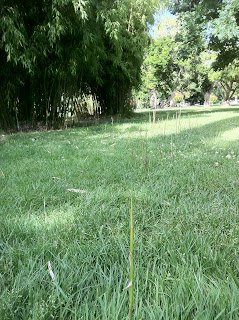 And, here is why bamboo rhizome barrier is always suggested for running bamboo.  This is a culm coming out of the lawn.  No doubt the park maintenance staff just mow these down, but I thought with was a good visual of how far a running bamboo can 'run.' 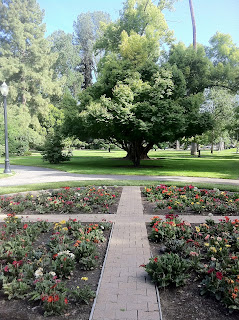 In the distance, that is a standard green Japanese Maple.  One of the largest ones I have seen.  Another great area in Sacramento to see mature specimens of Japanese Maples is in east Sacramento near McKinley Park. 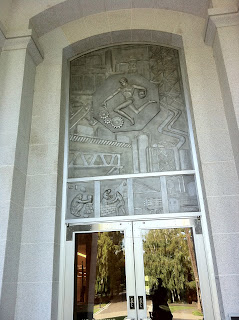 A bas-relief sculpture at the east entrance of the State Capitol Building.

Peering into the patio at Mah Jong's, a restaurant in Downtown Sacramento.  Huge planters with bamboo set the mood for asian-inspired cuisine.

What a nice day - good food, great show and a chance to take in the sights in Downtown Sacramento, Midtown Sacramento and Capitol Park.  Lots of hidden garden sights, gems in my opinion, that can be found along the way. 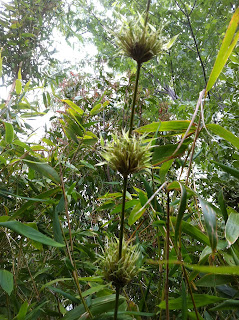 Saw the weirdest growth pattern on a clumping bamboo, Bambusa multiplex 'Silverstripe', normally on the nodes you will see maybe 8-10 branchlets.  As I was showing a customer around the bamboo garden, something caught my eye.  At first, a dire thought ran across my mind... 'Oh, no!  My 'Silverstripe' is flowering."  Bamboo flowers, on average, every 75 to 100 years.  Sometimes flowering means certain death for bamboo, but not always, sometimes it just looks really bad for a couple of years (saps the plant of energy as it flowers like crazy).  An the flowers aren't pretty, at least in my opinion. 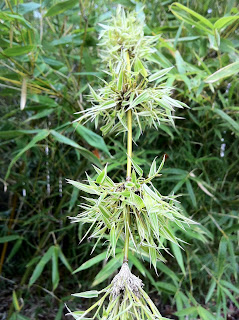 After the customer left, I took a closer look.  At the nodes, at least 30 tiny leaves. On one culm only, the rest were normal.  Looked like cheerleader 'Pom Poms.'  Truly a unique sight.  Can't say I can pinpoint what caused it.  Bamboo always amazes me....

Notes from a bamboo dig

Today, I packed up my tools and headed out to a home in Rocklin to dig out some Phylostachys nigra 'Black Bamboo' that the homeowner no longer wanted.

The original plant was planted by a landscaper about 13 years go, but the landscaper didn't install rhizome barrier.   I always recommend installing rhizome barrier with any running bamboo put in the ground directly.  It adds some cost and if self-installed takes some work, but it is worth it.

The plant, unchecked, marched towards a fenceline and that's where I came in to help.

Tools in hand and with a little help from my Sawzall, I went to work. 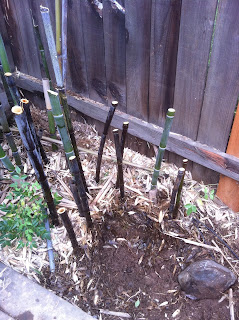 The 'Black Bamboo' had been topped, but the rhizome mass can still be cut and grown out over time.  It will shoot again given some time.  Since this section is so close to the neighbor's fence, we started in this here first. 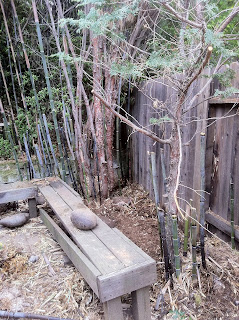 After about two and a half hours, we made some good progress.  The bamboo actually surrounded two bushes and that portion proved the hardest to remove.  I plan on returning in two weeks to help the homeowner remove more of the bamboo. 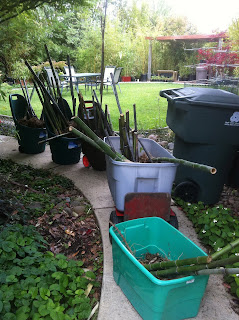 Here is the result of my labor.  Rhizome masses with some top bamboo culms ready to be placed in soil-covered holding bins. 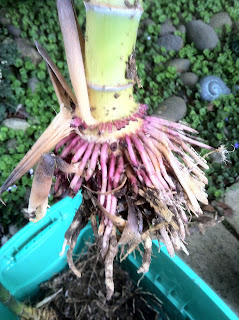 Pulling the culms out of the bins, I thought these roots were quite beautiful sporting a pinkish-purple color. 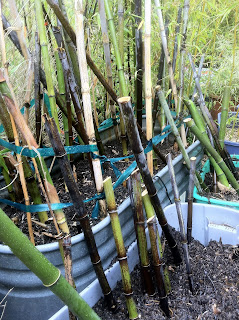 This is a temporary home for these rhizome masses and culms.  I ran out of dirt and will be making a trip to the hardware store for some more.  Many of these will end up as 5 gallon plants that will be sold next year.  Although it has been a colder June (so far) in northern California, this weather, overcast, cooler with evening rain is the perfect conditions to do a bamboo dig.  I'm excited to see the growth of this 'Black Bamboo' in the coming months.  Truly nice to see all my hard work today pay off.