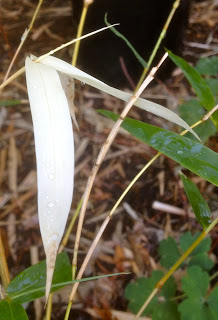 I  must admit that I have been a bit busy and well... I'm a bit behind on a few things including this blog. One thing that was a great experience a few months ago was to participate on the DIY Network's show Turf War.  No, I didn't have my yard remade into something new, pitting my self against a competing neighbor's yard makeover.  Rather, I was able to provide clumping bamboo for the project (one of the competing neighbor's yard located in Elk Grove, CA).  The show itself aired on June 1, hence my guilt for the lateness of this post.

I couldn't post photos or really even discuss the show until it aired on June 1.  So 16 days later, I want to share me experiences with the show and the project.

As with most camera shoots that are not live, your often at the whim or mercy of the post-production editor. And much to my surprise, when I was finally able to watch the show (via the complimentary DVD that was sent to me by the production company), I actually had some air time (providing advice on clumping bamboo to one of the show's contestants).

In the show I participated - Fire Water versus Floating Bed, I had the great honor of working with local landscape professional Aaron Cochran of Landscapes by Cochran.  Aaron is one of the most down-to-earth guys you could run across in the landscaping industry and really cares about the details.  He is passionate about his work and it shows.  In the episode I participated in - Aaron won. No surprise from me.  Aaron knew the difference between running and clumping bamboo and know how to incorporate it into a landscape appropriately and artistically.

Honestly, this understanding of bamboo (specifically the difference between running and clumping bamboo) is lost on many folks, even landscape professionals, but Aaron showed a level of expertise and savvy on how you can use clumping bamboo - with all the benefits and none of the problems that running bamboo can pose in the ground.  Of course, with the good information that does exist on clumping bamboo on the internet and in well-informed gardening magazines, the perception of bamboo, specifically clumping bamboo, is changing.

I also was very impressed with the production staff at Big Table Media, a Sacramento based production company, and there overall knowledge of bamboo.  I discussed bamboo at length with some of the production staff and they showed a genuine appreciation for bamboo and really understood the difference between running and clumping bamboo.  It was really quite refreshing.

Thanks to professionals like Aaron, he was able to use clumping bamboo in his winning Turf War design.  Cheers to that!

So, here are a few photos and highlights from the Turf War episode I participated in: 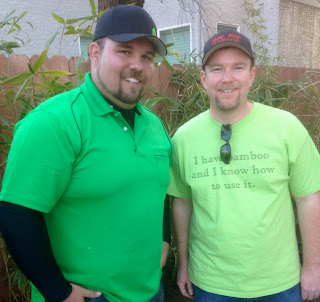 Aaron Cochran and I at the project site, clumping bamboo is in the background. 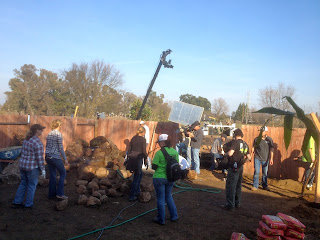 Filming the homeowner and Aaron working on the water feature. 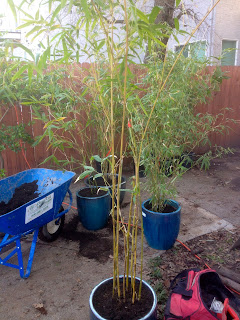 Bambusa ventricosa 'Buddha's Belly Bamboo' that I helped the homeowners plant in pots. Great choice since a constrained environment (growing in a pot) really brings out the 'bellies' in this bamboo. If you watch the episode, this is where I provided advice along the way, some of which showed up.

Overall, I really enjoyed participating in the show.  Aaron really did a great job on design and execution.  Most of all, his incorporation of bamboo showed a level of sophistication and understanding.  Coupled with the well-informed Big Table Media staff, it was great to see how well this project turned out with the use of clumping bamboo.

The show continues to be re-aired, so check your local listing or the DIY Network's website for the next time it is scheduled to air.