How and why bamboo plants get named the way they do... "Teague's Blue" 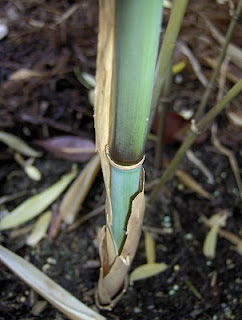 I'm always fascinated by how plants, specifically bamboo plants, come by their common and scientific names. Always been curious why Himalayacalamus hookerianus "Teague's Blue" was named the way it was.
According to some research by San Marcos Growers, the variety came from a co-founder of the American Bamboo Society named Ken Brennecke. Mr. Brennecke obtained it from the Ponto Nursery in 1985 and subsequently passed a division along to San Diego Horticulturist Bill Teague. Mr. Teague's plant apparently grew well and he passed several divisions along to friends. From there the story emerged that this special variety of Blue Bamboo came from Mr. Teague and the the name "Teague's Blue" became associated with this variety.
Mr. Teague was instrumental in getting the Quail Botanical Gardens established in San Diego County, was an early American Bamboo Society member and was well respected as a horticulturist. Mr. Teague just recently passed away, but what a beautiful plant to have your name associated with as a lasting tribute. To read more about Mr. Teague's life, read here.
To me, it's a fascinating story, and amazes me the path plants take in the horticultural naming process. Sometimes very deliberate and some times, like in this case, in a somewhat evolutionary way.
Cheers!
Sean
Mad Man Bamboo
www.madmanbamboo.com
Mad Man Bamboo Facebook Page
Mad Man Bamboo on Twitter
Posted by Mad Man Bamboo Nursery at 9:11 PM

Very interesting story! Teague's Blue is one of my favorite bamboos. The culm color is so stunning. I can't wait for my plant to get bigger!